Emmanuel Abraham Ekong popularly known as Breeve A is an inspirational and anointed gospel singer based in Lagos city.

He hails from Ikot Ndien in Ikot Abasi LGA of Akwa Ibom state, Nigeria born on the 23rd of December .

As a promising teenager, Breeve A has always been a lover of good music, but he found grace and became so passionate about God and expresses love for God through pure and intense worship after he gave his life to Christ Jesus.

Talented with a unique voice and now blessed with grace, he uses his passion for singing to draw the heart of people to God.

After His amazing debut titled ‘ Nara’ that has blessed so many lives (produced by Lagos legendary producer Mchordbeatz). 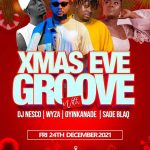