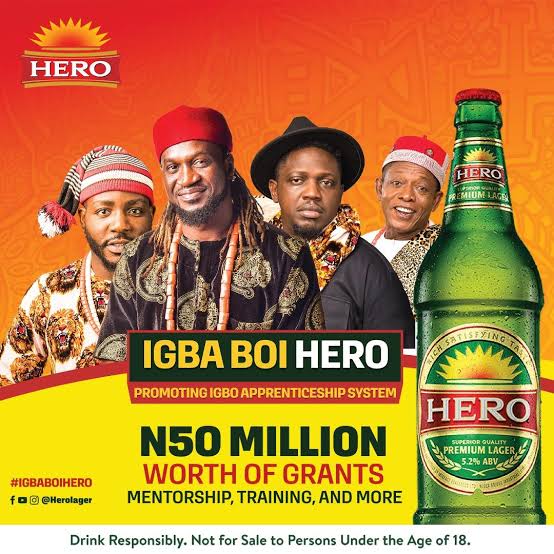 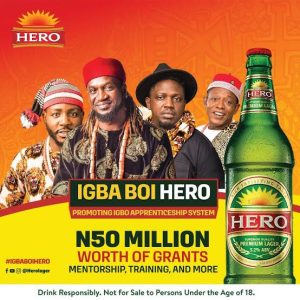 Premium lager, Hero, has announced the Igba Boi Tour, a campaign targeted at Igbo apprentices who are in their penultimate year of graduation from the Igba Boi scheme with N50 million business grant, training and mentorship.
The campaign which was announced to kick-off activities in Onitsha on Thursday was attended by Igbo dignitaries and businessmen, community stakeholders and top officials of International Breweries Plc.

The tour will see Hero Lager extending a hand of support to Igbo apprentices who are on the verge of attaining independence through mentorship, seed capital grant, and business advisory.

Speaking on the decision to launch the campaign, Marketing Director, International Breweries Plc, Tolulope Adedeji explained that the Igba Boi Campaign Tour is a follow up to the Aha Gi Efula and Hero’s Walk documentary which tells the story of the Igbo apprenticeship system and has been viewed over one million times on YouTube.

“Through the Aha Gi Efula (May Your Name Never Be Lost) campaign, we inspired consumers of Hero to aspire for success and encouraged them to strive to leave lasting legacies.

The campaign also served as a reminder and boost to the courage, resilience, hard work, and persistent nature of Nigeria’s young men and women.

“With the Igba Boi Campaign, we are going one step further to entrench the Igbo apprenticeship culture by beaming the spotlight on the Igba Bois without whom the culture would cease to exist by catalysing their journey to independence and entrepreneurship success through mentorship, the award of grants, and business advisory,”
Adedeji said.

A rigorous selection process will follow the collection of entries to ensure that only those who have a maximum of six months left to serve and have proven to be worthy trainees over the years are selected.

“100 Igba Bois will be selected across the six markets; these trainees will be taken through a 2-day training and mentorship programme where they will learn the rudiments of business and receive a grant of N500,000 each to kickstart their entrepreneurship journey,” she said.

Hero, popularly called “O’Mpa”, a deeply cultural and altruistic brand has been at the forefront of recognising and rewarding its consumers who are passionate about working hard and leaving a legacy wherever they go.

Over the years, the premium lager has endeared itself to the hearts of the Nigerian populace, particularly those in the southern and eastern parts of the country for its originality, social responsibility, and cultural affinity.

The Igba Boi campaign will run from September to December 2021 and is only open to individuals who are 18 years and over.

A renowned Nigerian Artist, Nkem Owoh, who is also Ambassador of Hero Larger Beer brand urged the Igbos to avail themsves of the opportunities.

He said that the project would help to reduce youth unemployment as well as drug addiction because they will usefully engaged in business activities.

“There are lots of thing derivable from this conception I will not be able to mention, particularly as concern commerce and trade promotion in the south east region,” he said.

Obi of Onitsha, Igwe Alfred Achebe, represented by the Osuma-Afah of Onitsha, Chief Samuel Chukwudebelu commended the company for the choice of the region to flag off the campaign.

He assured the sucess of the project because “our people will be fully mobilize to participate actively”.

Hero, premium Lager, is a product of International Breweries PLC 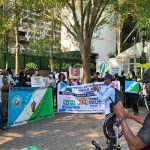 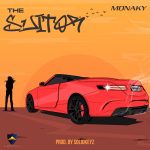